The Emperor – Tarot Card Meanings of the Major Arcana 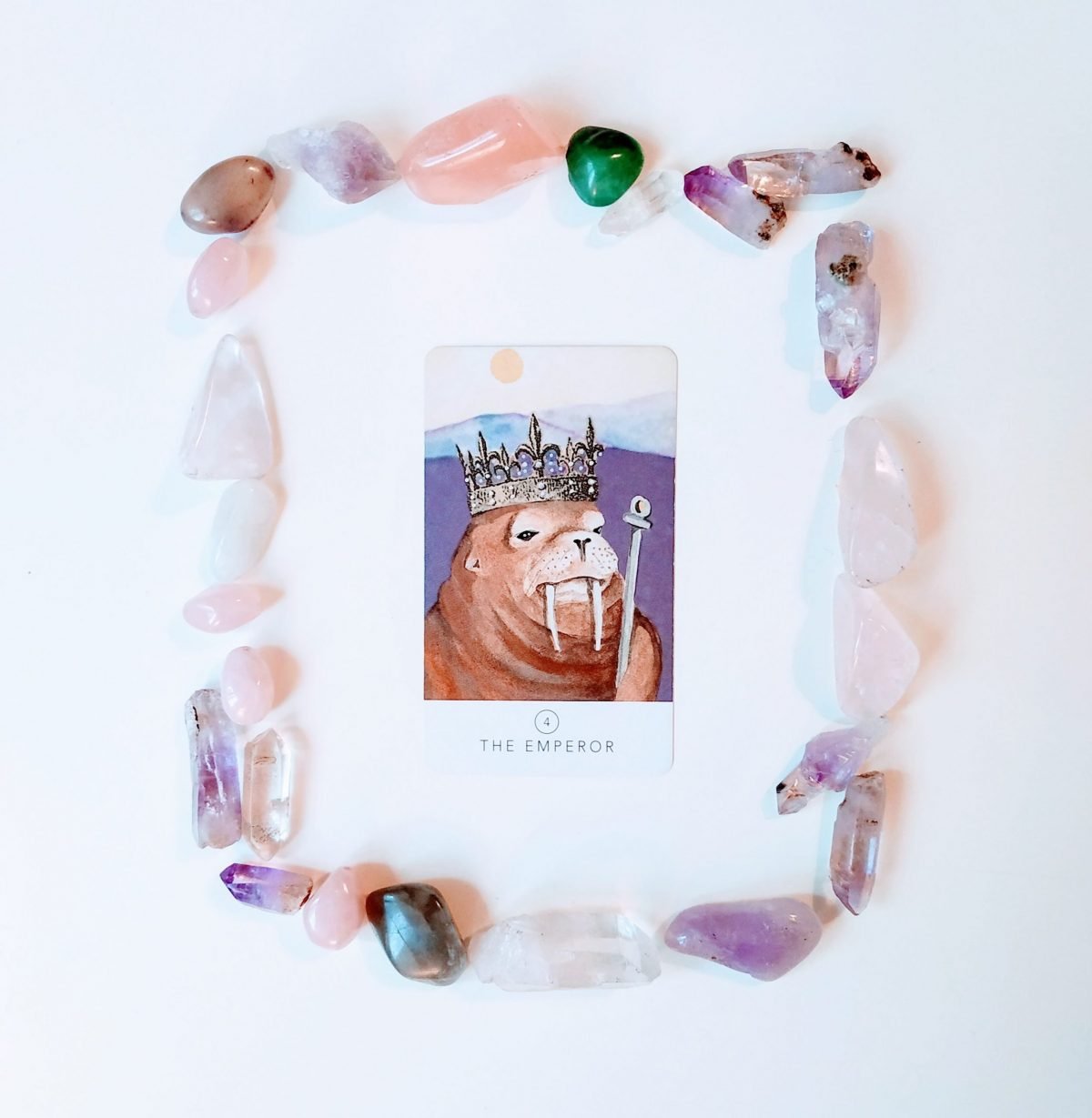 When the Emperor tarot card appears in your reading, there are energies of stability and authority around you. The Emperor is like a traditional king. He is charged with protecting his people and leading them through conflict with strength but also with compassion.

You’ve got some stable foundations in your life, or perhaps there is a significant other that embodies this archetype. However it resonates with you, the energy of the Emperor is a powerful energy to have in any tarot card reading.

Love the card featured in this post? Its from the White Sage Tarot deck and you can purchase it right here. It’s small cards and convenient tin make it great for travel and for younger readers! 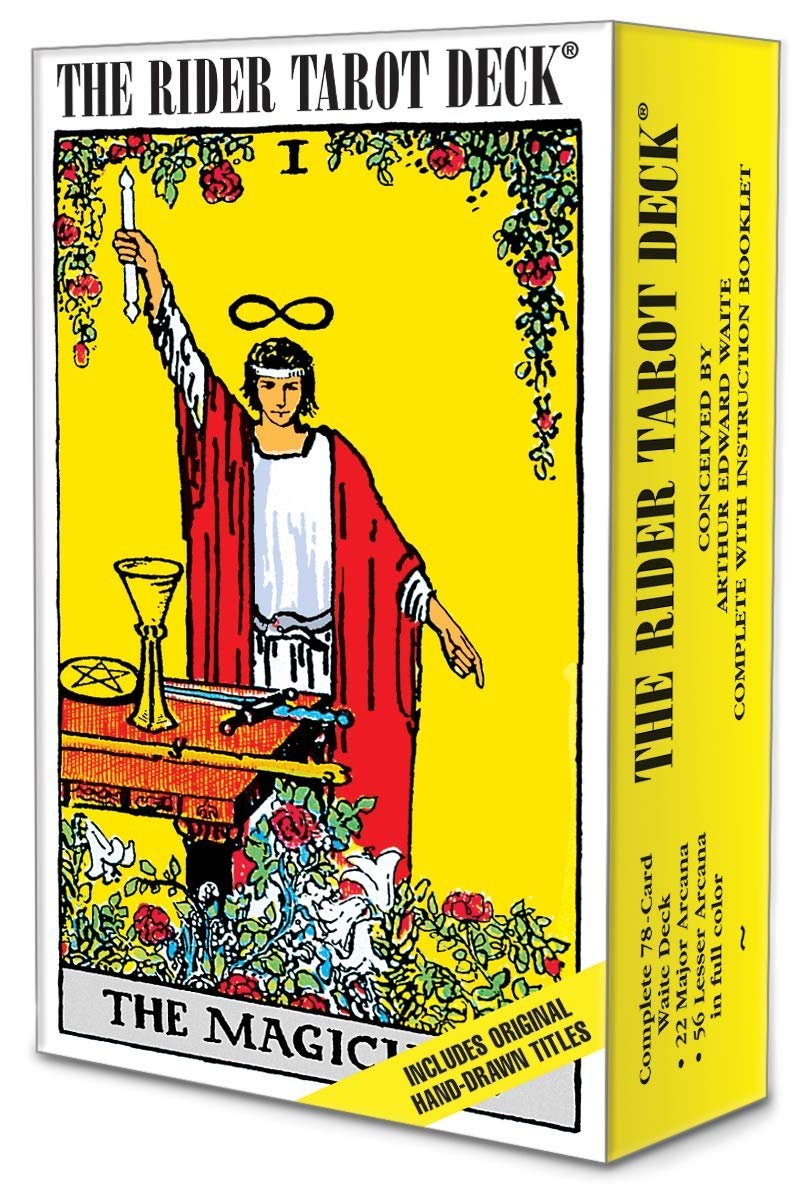 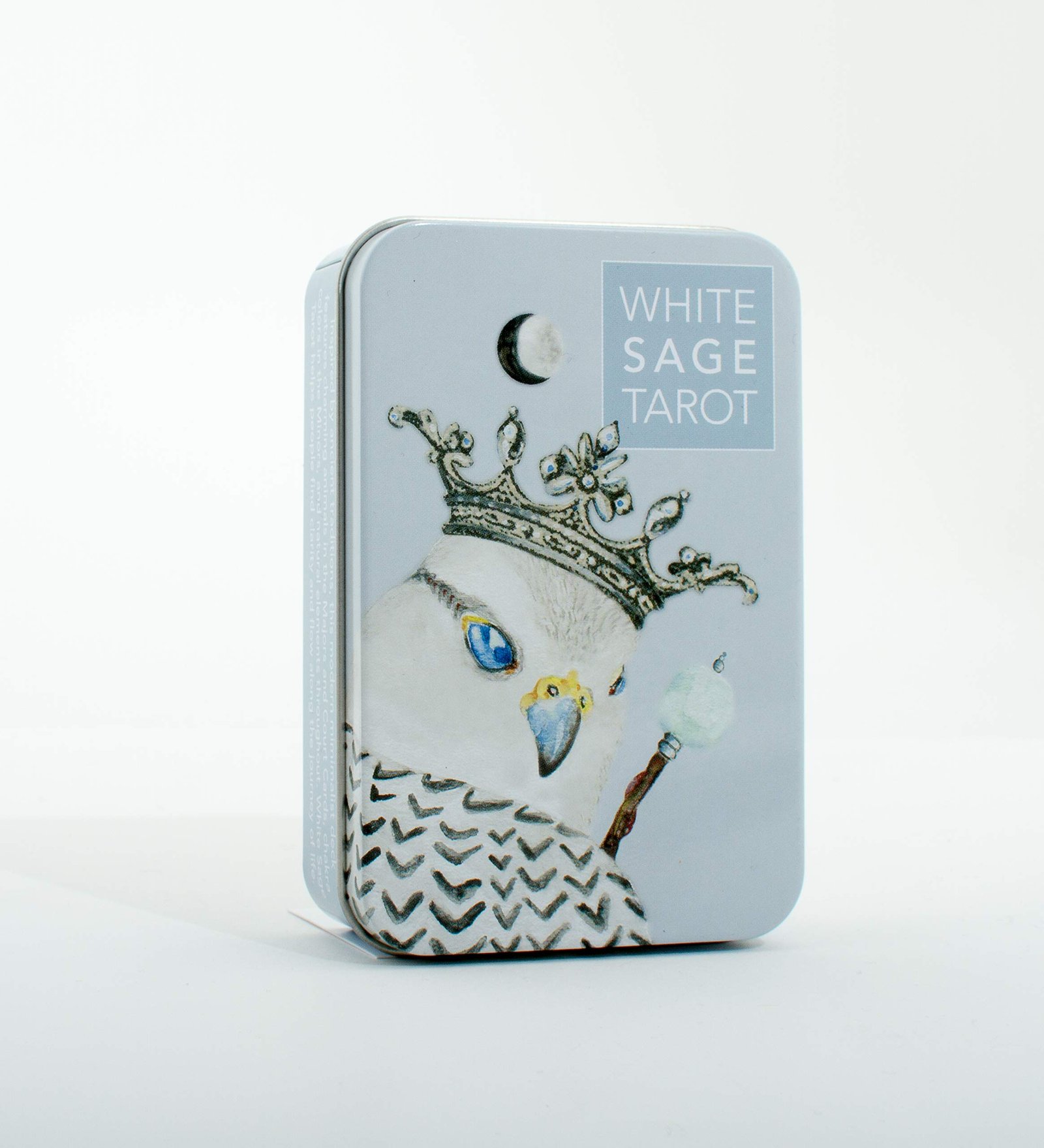 The Emperor tarot card represents structure and control. His archetype brings authority, leadership and stability. In his benevolent manifestation, he is The Great Father, the divine counterpart of The Empress. He is a protector and represents The Establishment.

The Emperor Tarot Card in the Past

You may have come from a stable and even rigid background. Authority was an important factor in your upbringing and the rules were always clearly spelled out.

If this card is referring to your more recent past, this energy could represent a recent job or energy in a relationship or partnership. Whatever the case, this archetype is influencing your current situation and lays a foundation for your reading.

The Emperor Tarot Card in the Present

You are feeling very stable and in control. You are focused on rules and regulations, systems and ways of doing things. Or perhaps you are in a relationship or situation where an authority figure is very prominent.

If this card is in the advice position, The Emperor may be indicating that you need to better embody these energies. Do you need to take control of your life? Do you need to embrace routines and structure a little bit more? The energy of The Emperor is asking you to father yourself.

The Emperor Tarot Card in the Future

There is a period of stability approaching, or perhaps you will be moving into a position of authority in your life. You may be getting a promotion at work that puts you into a leadership position, or you may become a father.

The masculine “yang” energies are at play here, regardless of your gender. Be the ruler of your own kingdom. Embrace your inner strengths and lead with confidence and benevolence.

The Emperor in Your Love Reading

There is an energy of traditional strength and stability in your current relationship. You or your partner may be focused on the “right way of doing things” in a predictable and methodical way. In terms of romance, this can get a little boring, so you may need to make an effort loosen and spice things up!

If you are currently single and looking for love, you may be embodying the energy ot The Emperor tarot card. Be aware that when we embody any energy in excess, we attract its opposite in order to restore balance.

If your inner Emperor is lacking, you might attract an Emperor in excess energy. This can bring controlling and domineering people into your life. Be assertive, stand up for what you want and deserve.

If you are in an excessively “Emperor-like” state, you might have more success in romance if you bring some of your divine feminine qualities into the mix. Spend a little time being creative, practice self-love, and enjoy the finer things in life. And remember, “All work and no play makes Jack a dull boy.”

The Emperor in Your Career Reading

The Emperor tarot card in your card in your career reading will either indicate your current environment or what you are striving for. It could also represent what is challenging you, but that would require an interpretation of the surrounding cards.

If you are looking for advice regarding your career and The Emperor appears, it is likely that you are needing to take the bull by the horns. Take charge of your future. Don’t be timid and afraid. Make sound and reasonable decisions that are in service of your future stability. Turn away from wishy washy or chaotic situations.

The Emperor in Your Health Reading

Stick to the tried and true when it comes to your health. The Emperor tarot card represents traditional medicine in a health reading. If you are having medical concerns, make that doctor’s appointment and be sure to dot all of your i’s and cross all of your t’s.

The Emperor in Your Spirituality Reading

The Emperor is the wise leader who is backed by tradition and wisdom. In a spirituality reading, the Emperor tarot card advises you to stick to your current path. There is stability and security in the tried and true.

The Emperor in Reverse

In the reverse, The Emperor is a difficult card. It is a controlling and domineering person. An intolerant tyrant. This archetype is lacking empathy and is devoid of kindness. At the end of the day, control and power is all that matters to this Emperor.

If this card appears in your reading regarding someone you are dealing with, be careful. Do not assume they will behave with decency or compassion. If this card is representing your energy, stop and take a moment to reflect on the source of your need for control.

The inability to surrender and flow always stems from fear of some sort. Whether it is fear of loss, fear of betrayal, or anything else, it is better to work in a positive fashion to assuage your own fears. This way you can restore balance in your own life rather than live defensively at the mercy of your external environment.

It is important to always look within, rather than point fingers. Remember, life isn’t happening to you. You are happening to life.

Symbology of The Emperor

The Emperor sits on his throne, stable, secure, perhaps a bit rigid. Underneath his robes, he is wearing a suit of armor. This indicates that he has been to battle and persevered. He’s one tough cookie.

How to Embody The Emperor

Activate your solar plexus chakra. Have confidence in your own wisdom and knowledge. Remember that all of your struggles, trials and tribulations have made you stronger. It is from the place of experience and wisdom that we can best lead and protect others. But it all starts with leading and protecting ourselves.

Want to learn more about embodying the tarot? Check out the Embodied Goddesses online ascension and manifestation course. Through meditation, chakra work, music, dance and other spiritual practices, this nine-module course will teach you how to embody the benevolent Emperor.

The Wheel of Fortune